It has been amazing to see the impact that Windows Insiders have made since we launched the program last year. Your feedback has helped us fix bugs and make changes which resulted in a better product because of your input. Thank you to all of the Windows Insiders who have been with us so far. Now I’d like to talk a bit about what is next.

Feedback from Windows Insiders not only helps us build Windows 10 – it also helps us shape how we run the program. For example, Windows Insiders have asked us to improve the flighting cadence and to keep the Windows Feedback app in the product – which we have done. We’re also evaluating the Windows Insider rings, and considering whether we should make changes there. Over the past few months we’ve been looking at feedback to see what changes we want to make going forward. We’re putting plans together now, so you won’t see any changes immediately, but they will come over time. We’ll be doing our best to make sure that we improve every aspect of the program, from build distribution to the Feedback app and Insider Hub. And of course we’ll be looking to do more fun things for Windows Insiders as well, like our Insiders to Campus event, Ninja Cat goodies, special wallpapers and more.

If you’re already a Windows Insider and have been running Windows 10 Insider Preview builds – there is nothing you need to do. You will automatically be upgraded or you can upgrade your build via Windows Update. If you want to get a Windows 10 Insider Preview build installed on a PC running Windows 7 or Windows 8.1, you should first upgrade to Windows 10 using the free upgrade offer* available to qualified, genuine Windows 7 and 8.1 devices. From there, you can opt in to the Windows Insider Program via Settings app > Update & Security > Advanced options under “Get Insider builds”.

We have decided to include the Windows Feedback app in the released version of Windows 10 for all our customers. This was a very popular Windows Insider suggestion – one of our top 10 upvotes. At the same time, we wanted to continue giving our Windows Insiders an exclusive and premium experience when it comes to sending us feedback. So, here’s what you can expect from the Feedback app going forward: 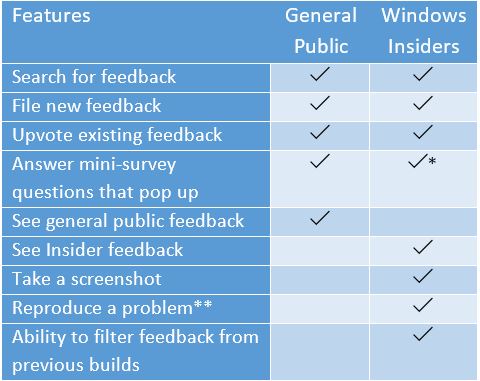 We have also cleared out the older feedback that we received early on in our product development cycle from the default search results that get returned in the app. You might wonder what’s going to happen to all the feedback you left. The feedback you’ve previously provided is still stored in our internal engineering tools. Engineers are using it to find and filter on key feedback for their areas.  This blog post that we previously published describes what we do with your feedback.

We’ll still give you credit in Insider Hub for the feedback you’ve previously left.  You will be able to view a full history of your feedback under “My feedback” with a special marking called “Archive” for pre-release feedback. 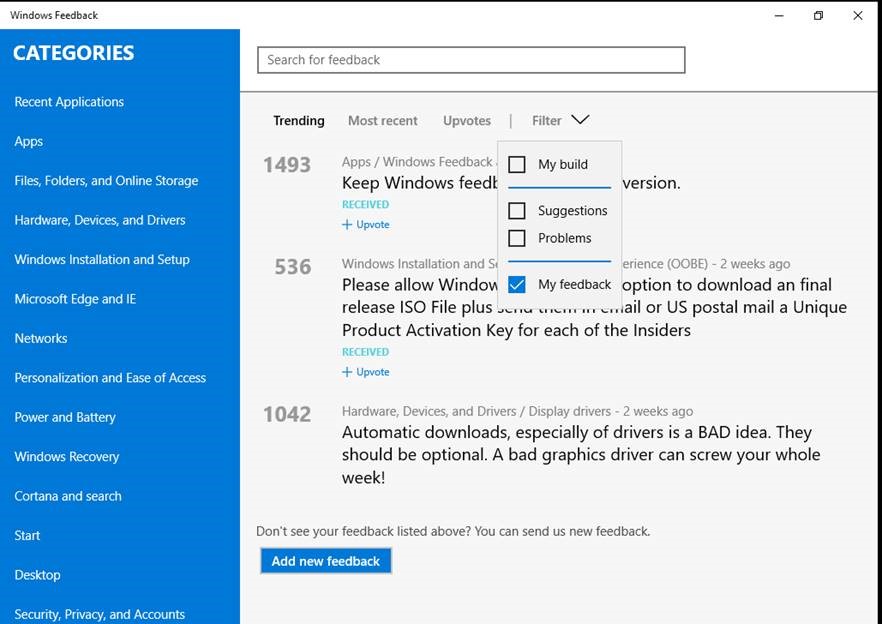 We’ll get better at aging out feedback with future enhancements to our app, but for now we want to clear the deck, so that the newest, most relevant feedback is finding its way to the top of the search results that you see in the Feedback app.

The Insider Hub is again included in the build by default.

The most exciting news in this post is that we have a new build for PCs we’re releasing today to Windows Insiders in the Fast ring – Build 10525.

This is our first new build since the release of Windows 10, and I’m very happy to talk about one new thing that you’ll see because it really highlights both how your feedback influences the product development as well as illustrating how some things will get implemented at different times depending on when we’re trying to stabilize and drive quality vs. when we’re open for new feature work.

We got a lot of feedback on the default color for Start, Acton Center, Taskbar, and Title bars and that you wanted to be able to change to reflect your preferences. This feature is now available (though still early) in build 10525 for you to try. This is off by default, but you can turn it on by toggling this (Settings > Personalization > Colors): 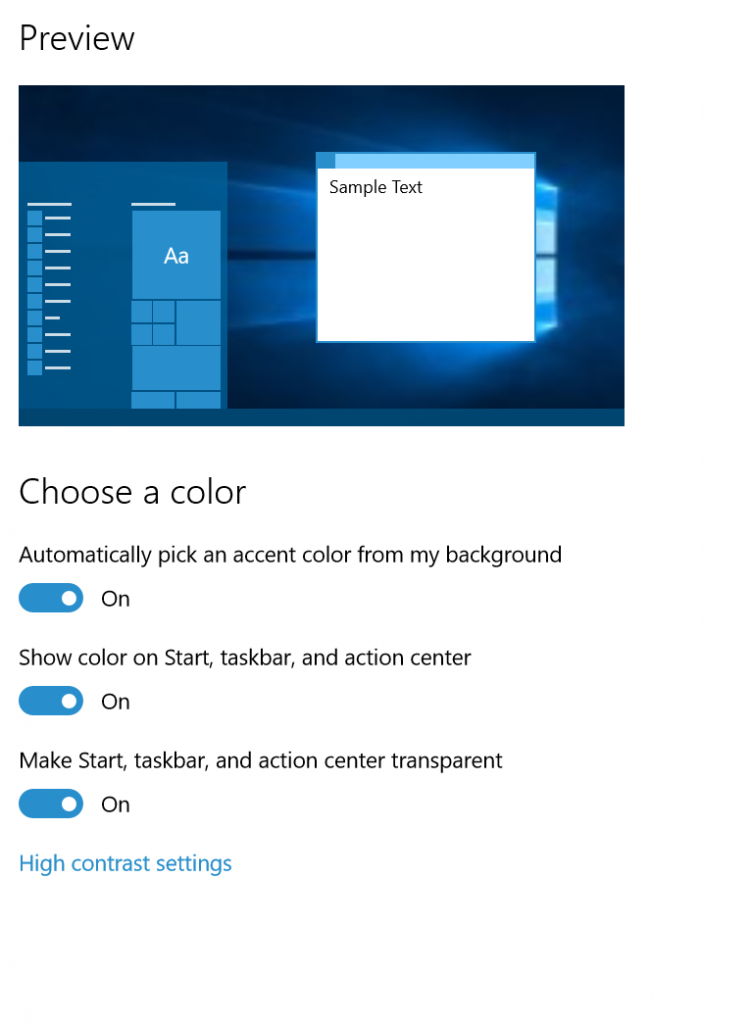 In Windows 10, we have added a new concept in the Memory Manager called a compression store, which is an in-memory collection of compressed pages. This means that when Memory Manager feels memory pressure, it will compress unused pages instead of writing them to disk. This reduces the amount of memory used per process, allowing Windows 10 to maintain more applications in physical memory at a time. This also helps provide better responsiveness across Windows 10. The compression store lives in the System process’s working set. Since the system process holds the store in memory, its working set grows larger exactly when memory is being made available for other processes. This is visible in Task Manager and the reason the System process appears to be consuming more memory than previous releases.

We do have a few known issues with this build.

Part of the fun of being a Windows Insider is getting to tinker with prerelease software before the rest of the world, but you should be very aware as an Insider that prerelease software will come with bugs and things that are incomplete. Make sure you know and accept what you’re opting in to when you join the program, and of course make sure to back up all of your personal data before you begin.

I’m very excited to be able to officially welcome you to the next phase of the Windows Insider program and bring you a new build today. I hope that you have fun with it, and be sure to keep sending in your feedback via the Windows Feedback app!