Today we are excited to be releasing Windows 10 Insider Preview Build 15007 for PC and Mobile to Windows Insiders in the Fast ring. 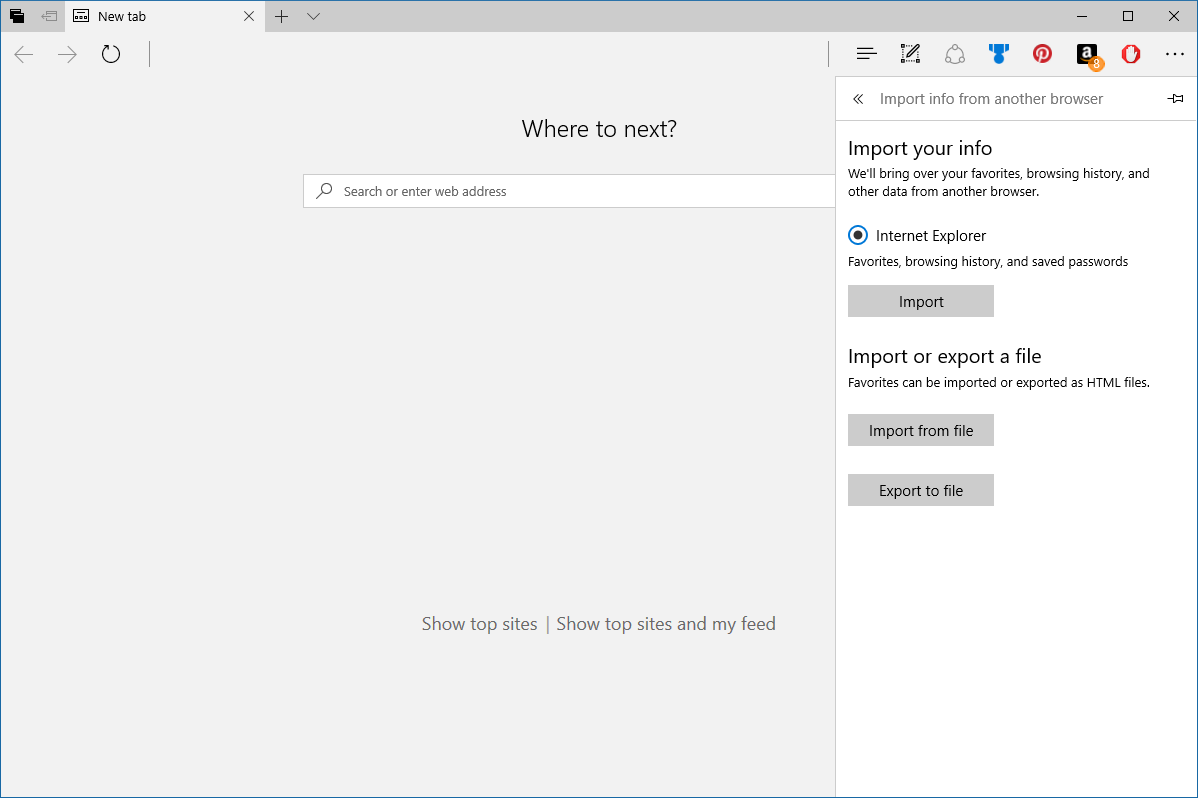 · Web Notes improvements (PC): We’ve updated Web Notes to now leverage the familiar Windows Ink experience you’ve come to know in Photos and Maps, amongst other places. Tap the pen or highlighter in Web Notes, and you will now see the full set of Windows Ink colors, as well as the new slider released for Windows Ink with Build 14986. 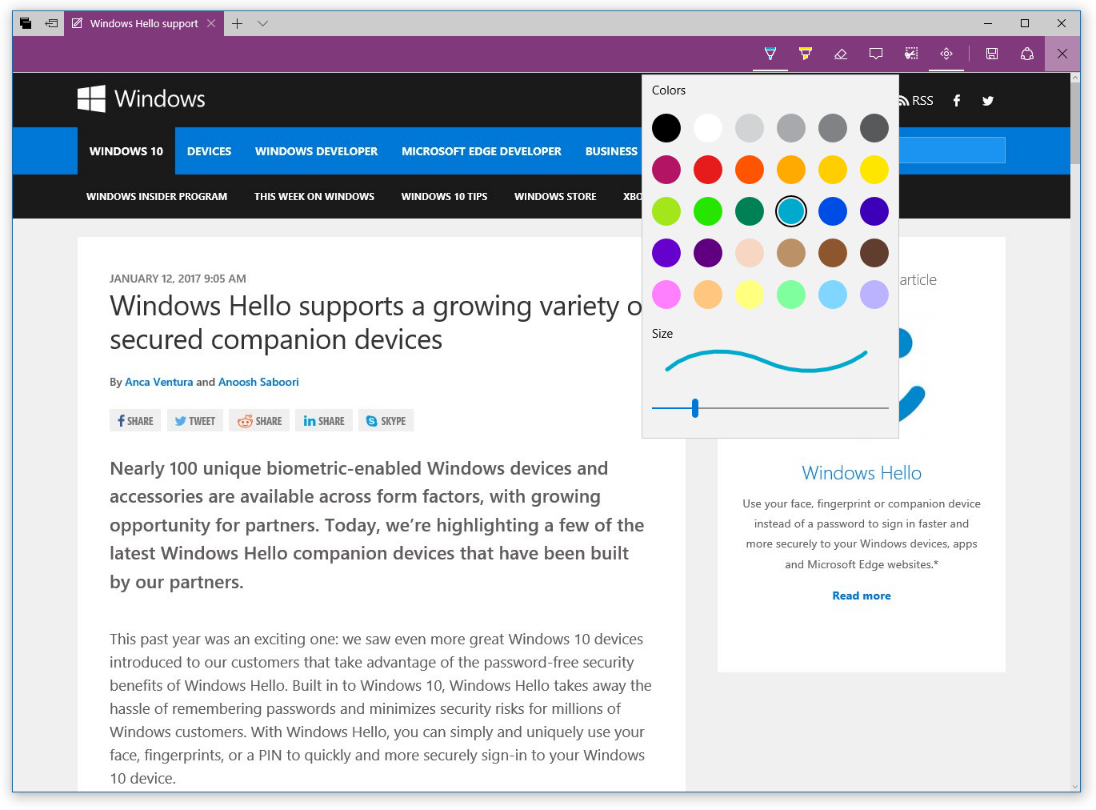 · Text scaling and zoom (Mobile): Based on your feedback, in Microsoft Edge you can now zoom into a webpage regardless of zoom settings defined by the meta viewport in the website, matching other mobile browsers. Pages are now zoomable to at least 500%. As such, we’ve disabled automatic text scaling in Microsoft Edge when you’ve enabled the Ease of Access option to increase the text size, so as you can zoom in on the text to reach a size that matches your own comfort level.

· Apps for Websites: Clicking links to websites that support web-to-app linking will now open that page in the respective app.

[Coming Soon] Download themes for your PC from the Windows Store (PC): In Build 15002, we introduced the new themes settings page in the Settings app. Soon, you’ll be able to go directly from the themes setting page directly to the Windows Store to download new themes for your PC! This isn’t working yet in today’s build and you’ll see a Store icon that does nothing at the bottom of the themes setting page. However, you can go to the Store page for themes here to try out downloading themes from the Store. 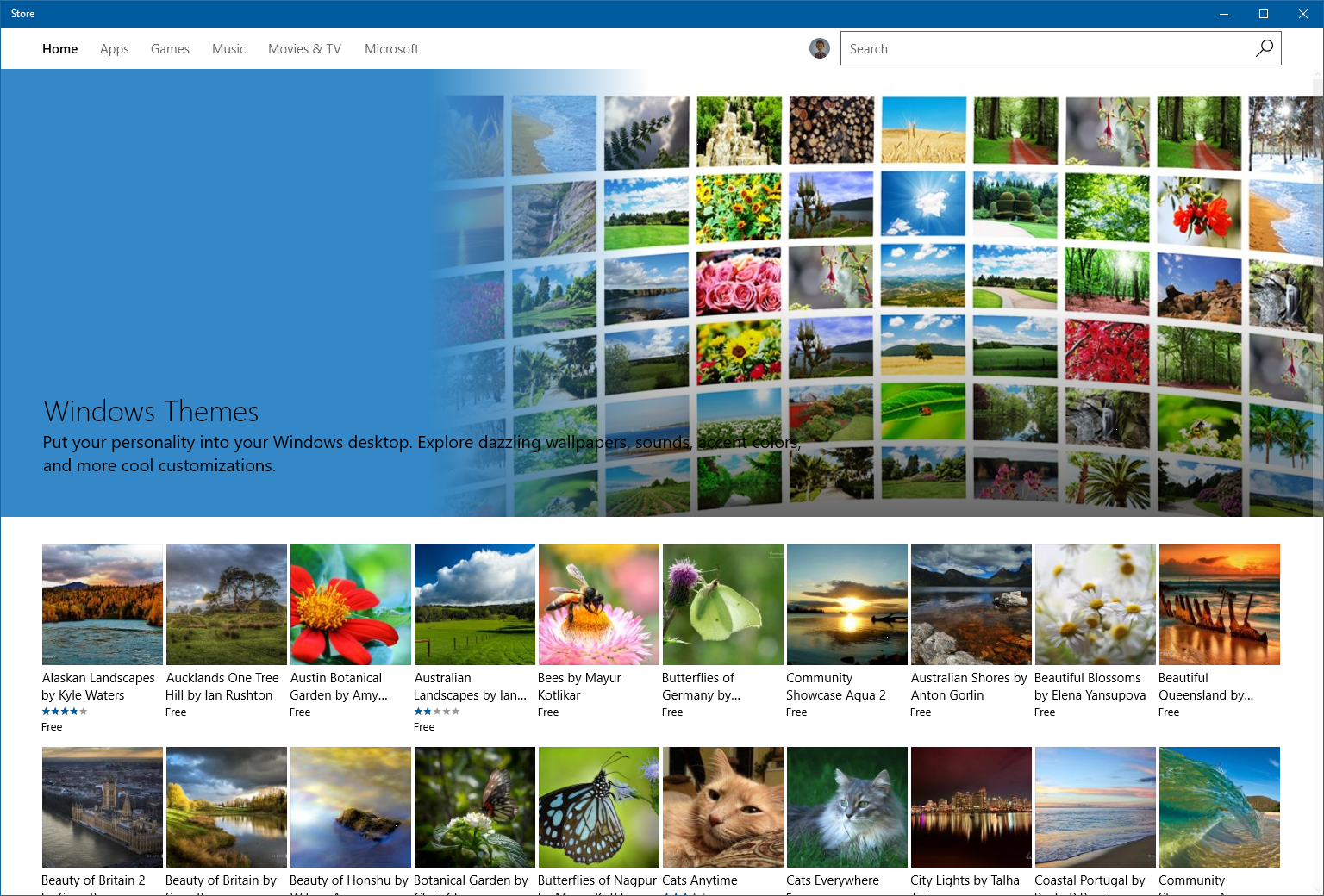 Cortana can help you pick up where you left off (PC & Mobile): If you have multiple PCs, you probably know how cumbersome it can be to find everything you need to resume work after switching between PCs. Cortana can now help with that! When you switch computers, Cortana will display quick links in the Action Center to help you easily get back into the Microsoft Edge websites and SharePoint (or other cloud-based) documents you used most recently. For example, if you were working on a PowerPoint deck on your laptop, when you later return to your desktop, a link to that deck appears in Action Center. Or perhaps you’re browsing recipes in Microsoft Edge on your PC downstairs, and grab your laptop to go bake up a storm in the kitchen—Cortana will be there for you and have a link to that recipe ready to go. In adding this feature, we’ve also updated Cortana to take advantage of notification grouping, described earlier, so you can more easily differentiate between the types of messages.

Inline progress bar for notifications (PC): Based on your feedback, app developers can now send toast notifications with a progress indicator to show progress to the user, such as download progress, exercise progress, etc. As a highly related but separate feature, we now also support developers to update an existing notification through “data-binding”. Please go to Tiles and Toast MSDN Blog to find out more.

In a future build, you will see this capability with Windows Store downloads.

Scrollbar improvements for UWP (PC & Mobile): We have made improvements to the XAML scrollbar for mouse to ensure it is available when you need it, while taking up less space and causing less undesirable flashing when you don’t. With these changes, the panning indicator now appears when you move a mouse over a scrolling region and the full scrollbar appears when you want to directly interact with it. This improvement will be visible in any app that uses the Windows 10 Creators Update SDK.

New Bluetooth APIs (PC & Mobile): This is the first build you can try out the new APIs that enable GATT Server, Bluetooth LE Peripheral role and unpaired Bluetooth LE device connectivity. To try them out install the latest preview SDK. For more information, check out this blog post.

Keyboard navigation improvements for the Snipping Tool (PC): You can now take a screen capture using only your keyboard. Press Alt + N, select the desired snip type and press enter – this will start the capture. Now use the arrow keys to move the cursor to one of the intended corners of your snip, and press either space or enter to start selecting your snip area. Once you have the area you want, press enter or space again to finish the capture. This keyboard navigation also works with the new Win + Shift + S keyboard shortcut.

Sync your settings using Azure Active Directory (AAD) Identity (Mobile): You can now sync your settings on AA-Joined phones using Enterprise State Roaming. With Enterprise State Roaming enabled for your phone, you can sync settings such as passwords, Wi-Fi profiles, Edge Favorites, Edge Reading List, and app data across desktop and mobile devices. To get the most out of this feature, make sure sync is turned on for the same account on both your mobile and desktop device under Settings > Accounts > Sync Your Settings.

App reset (Mobile): One of the features added to PC with the Windows 10 Anniversary Update was the ability to reset an app back to its original state. We’re happy to announce starting with Build 15007, the same will now be possible on Mobile - thanks everyone who logged feedback requesting this! If you have a UWP app in a bad state, open Settings > System > Storage, and navigate to the app. In the advanced settings for that app, you’ll now see a “Reset” option. Tapping it will clear the app’s cache, and reset the app as if it had just been installed (without actually having to reinstall it).

Cortana loves music (Mobile): You can now use Cortana to control music playback on more of your favorite music apps (EN-US only). Starting with this build, we’ve enabled natural language compatibility for iHeartRadio and TuneIn Radio. While you are listening to music in one of these apps, you can also use your voice to control playback and volume. With radio stations, we often want to know what that catchy tune is that has played a million times, so we added support for “What’s Playing”. Try saying “Hey Cortana, What’s Playing” and it will work for all apps playing music. This appeared for Insiders on PCs with Build 14986.

Adding music recognition support to Chinese (Simplified) (Mobile): Cortana can now recognize music for customers in China. Simply tap the music notes icon in the top corner of Cortana’s home page, and Cortana will listen to whatever music is playing and use Netease to tell you what song it is. This works exactly like the feature does in English (United States). This appeared for Insiders on PCs with Build 14986.

Cortana sign-in using Azure Active Directory (AAD) identity (Mobile): This capability will allow you to sign into Cortana with your work or school account instead your MSA, enabling you to use Cortana even if your organization does not support MSA. To sign in to Cortana using your work or school account, just go to Cortana’s Notebook and “About Me” and sign in. You’ll get the full Cortana experience with most of the same features. This appeared for Insiders on PCs with Build 14986.

More recurrence options for Cortana Reminders (Mobile): We’ve heard your feedback, and we’ve added a new option to set recurring time-based Cortana Reminders for “Every Month” or “Every Year” — great for bill payment or anniversary reminders! This appeared for Insiders on PCs with Build 15002.

Web payments: Microsoft Edge now has preview support for the new Payment Request API, which allows sites to make checkout easier using the payment and shipping preferences stored in your Microsoft Wallet. This is currently in a preview state for developers and will not process payment information until a future flight. You can learn more about Payment Request on the Microsoft Edge Dev Blog. This appeared for Insiders on PCs with Build 15002.

Improved legibility for UWP apps in high contrast (Mobile): In order to address some of the most common high contrast issues experienced in UWP apps, we’ve updated the XAML framework to now display an opaque layer behind the text and coerce semi-transparent UI to be fully opaque. This appeared for Insiders on PCs with Build 15002. These adjustments are applied by default in high contrast and apply to *all* XAML Store applications, however apps will have the opportunity to opt out using the Windows 10 Creators Update SDK. More details will be available once the latest SDK has been published. If you find any issues with this work, please log them here, and as always, you can reach out to @MSFTEnable on Twitter at any time about accessibility problems and requests you have for accessibility in Windows.

Helping you find the setting you need in Settings (Mobile): One of our ongoing goals has been to make Settings easier and faster to navigate – based on feedback we’ve made a few design tweaks that appeared for Insiders on PCs with Build 15002, and are now also available on Mobile:

Updated device settings (Mobile): The new device settings experience combines the Bluetooth and Connected devices pages to offer a single place to manage your devices/peripherals. We've also listened to your feedback and added the ability to disconnect and reconnect your Bluetooth audio devices directly from this Settings page, as well as updated the flow for adding a new device connection. Try out the new page and let us know what you think through the Feedback Hub! This appeared for Insiders on PCs with Build 15002.

New option to pause updates: We’ve added an option that will enable you to pause updates on your phone for up to 35 days. To pause your phone, go to the Settings > Update & security > Phone Update and tap Advanced. This capability will be available on enterprise managed devices on Windows 10 Mobile. This appeared for Insiders on PCs with Build 15002.

Other changes, improvements, and fixes for Mobile

You all gave us feedback that you LOVED the last Bug Bash and wanted to do one during the holidays. We didn't have the feature set we wanted in Insider Preview builds nor did we have the team available to help triage Feedback Hub items at that time so we decided to wait. The wait is almost over! Our second Bug Bash for the Windows 10 Creators Update is planned for Friday February 3rd through Sunday February 12th.

By the participation levels from previous Bug Bashes, we know how much our Windows Insiders love to Bug Bash alongside our Engineering Teams and for this one, we’ve extended it to cover two weekends to give our Insiders more opportunity to provide us feedback. We'll publish some new quests as usual for this bug bash as well. We are also planning at least one webcast so we can all Bug Bash together (more details coming soon). Thank you to all the Insiders that have participated in the past and to those who will participate in this upcoming Bug Bash. Your feedback is *very* valuable to us and helps shape Windows 10!

We have gotten an outpouring of supportive mail and comments from you all on the stories of the people in the Insider Program. The most recent one by Callum Moffat one of our youngest and most passionate Insiders really struck a chord with us. We love hearing the stories behind the people sending us feedback, so if you would like to share yours, please let us know.