On Sunday May 1st PST, we concluded our first ever external Bug Bash. THANK YOU for your amazing participation. Your feedback goes a long way and helps us prioritize the areas we want to focus our effort on in making Windows 10 better. We wanted to share some insights on the Bug Bash participation.

We had 89 Quests for the Bug Bash and got great coverage on these. These Quests covered a range of topics relating to overall Windows experience, Apps, Devices, Personal, and Productive experience.

The top Quests that were favorite for the Bug Bash among Windows Insiders were:

The Bug Bash initially was intended for 4 days, but due to popular demand, we extended it over the weekend. The graph shows the overall Quests completed over the course of the week. We saw the biggest participation on Wednesday and Thursday but as you can see, Insiders were engaged the whole time. 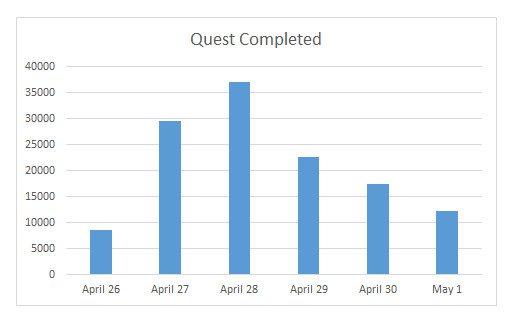 We also took a look at the top 5 countries where Insiders filed the most new feedback. This is feedback where you click on ‘+ Add new feedback’ in Feedback Hub.

The top Countries listed in order are:

The top 5 countries that we received most upvotes from listed in order:

It was interesting to see that in most cases, the top countries that provided the most upvotes also had a balance of providing most new feedback.

We also took a look at countries the top Insiders that gave us the most feedback are from:

Top individuals are from various places but Spain had both the top Insiders for upvotes and providing new feedback.

We got great feedback for the Bug Bash including the weekend. From the Quest chart above we saw a drop in engagement towards the end of the week but we see that Insiders were actively giving feedback throughout the week.  Total feedback from Windows Insider through the Bug Bash was just over 375,000! 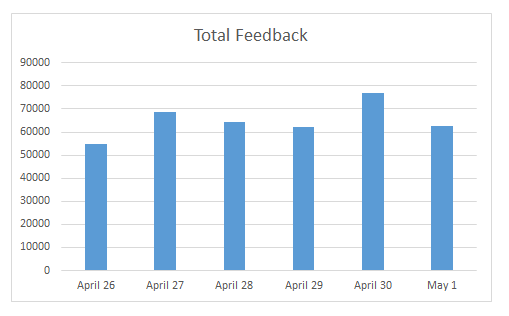 Below are some of the top feedback we received in Feedback Hub during the Bug Bash. We will be bringing fixes to these soon in a flight to you:

Engineering teams are actively going through the feedback we received from the Bug Bash to understand the issues, prioritize them and determine what to do next. Your feedback will help prioritize what we will work on next.

THANK YOU again for participating in the Bug Bash. Keep the feedback coming in the upcoming flights for Windows 10.