Today we are releasing Windows 10 Insider Preview Build 18894 (20H1) to Windows Insiders in the Fast ring.

If you are looking for a complete look at what build is in which Insider ring – head on over to Flight Hub. You can also check out the rest of our documentation here including a complete list of new features and updates that have gone out as part of Insider flights for the current development cycle.

We’ve heard your feedback asking for increased consistency, and to make it easier to find your files. Over the next few days we’ll be starting to roll out a new File Explorer search experience – now powered by Windows Search. This change will help integrate your OneDrive content online with the traditional indexed results. This rollout will start with a small percent, and then we’ll increase the rollout to more Insiders as we validate the quality of the experience.

What does that mean for you? Once you have the new experience, as you type in File Explorer’s search box, you’ll now see a dropdown populated with suggested files at your fingertips that you can pick from.

These improved results can be launched directly by clicking the entry in the new suggestions box, or if you want to open the file location, just right-click the entry and there’ll be an option to do so. If you need to use commands or dig deeper into non-indexed locations, you can still press enter and populate the view with the traditional search results. 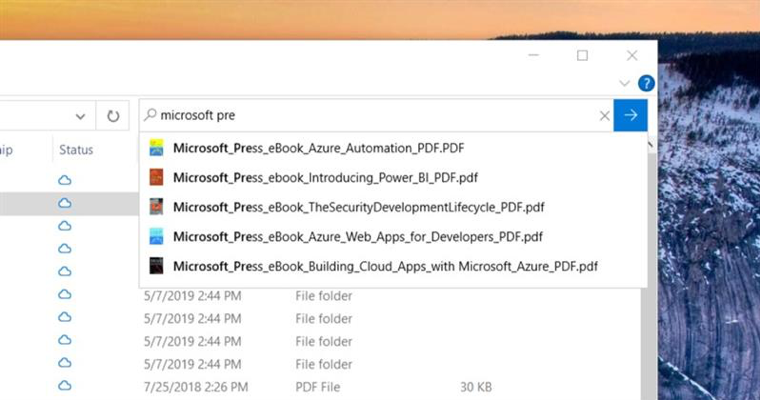 We’ve also updated the design, so now as soon as you click the search box in File Explorer (or press CTRL+E to set focus to it), you’ll see the dropdown list with your search history.

If you encounter any issues, or have any feedback, file them under “Files, Folders, and Online Storage” > “File Explorer” in the Feedback Hub.

NOTES: You may notice in the screenshot, we’ve made the File Explorer search box wider so the suggestions dropdown has a bit more room to show results – that’s not a new option, but we figured you might want to know how to do it: just move your mouse to the starting border of the search box, and your mouse should turn into a resizing double arrow cursor. Just click down and drag the search box to be a bit wider.